Living life in the moment

I forgot that I came by, read a couple of posts, got distracted, and didn't respond. Sometimes I do things in my head (only) and in my head that thing is done. Of course, the rest of the world can't know what's in my head. (It's best for the world that things stay that way.)

So here I am, much later, and I've caught up with all of your beautiful projects. Here are a few of my own projects. The first two were completed tops that have been waiting their turn on the long-arm for quite some time. 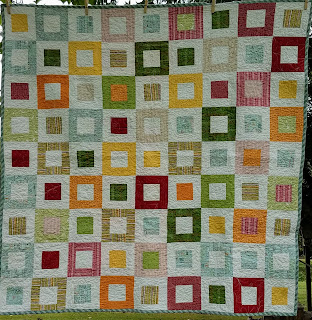 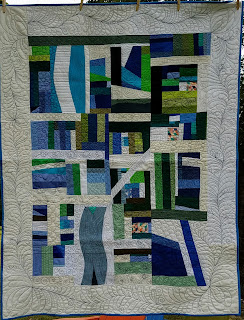 These two are more recent makes. Tops made in 2020. Both are improv quilts for different reasons. This first one found its positivity in that it's a donation quilt. The money from its sale will go to my guild and some boy will be happy from its warmth. 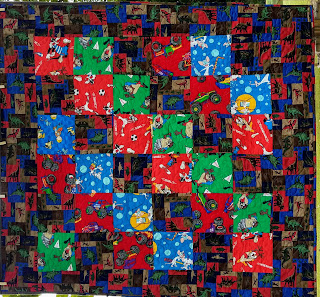 This quilt. I didn't know what to do with this insane thing. One day I just tried something new and voila! I loved it. Getting everything to go together was a bit of a struggle but also a celebration when I figured it out. It's my favorite quilt... until the next one. 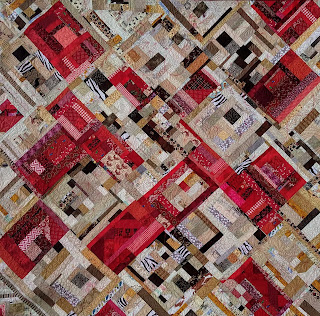 Most of my days the last month or so have been spent crafting small items to put in a craft booth at a local artist market. I can't even explain what's happened with that endeavor, but I'm enjoying the short break from quilting "ALL THE TIME," according to my family.

Thanks to everyone who responded. It's wonderful to know that all are well.

By Mary Marcotte at 9/30/2020 09:53:00 AM 7 comments:
Email ThisBlogThis!Share to TwitterShare to FacebookShare to Pinterest
Labels: #AHIQ, #AHIQPositiveThinking, #AHIQRed, Mary

Positive thinking is what we've needed this year. And the need has become greater with every day. I reset some of the electric socket string blocks with a medallion of tulips. It's a triple scoop ice cream cone - strings, medallion, and tulips. So those circles must be the cherries on top.

Audrey's many beautiful tulip quilts inspired me to create one of my own. Now that the ice is broken, I have ideas for several more. They are enormously fun.
Deliberately angled strings made a wild top, named by QuiltDivaJulie, but it seemed like one was enough. However, there were almost two more piles of these blocks. So, like kawandi, I started at the outside and worked my way in. One nice thing about applique is that it's easily scalable. Just enlarge or shrink the design to fit the needed space.  More details on my blog.
Keep focusing on positive thought and actions. And VOTE. Our lives depend on it.
By Ann at 9/26/2020 07:40:00 AM 6 comments:
Email ThisBlogThis!Share to TwitterShare to FacebookShare to Pinterest
Labels: #AHIQPositiveThinking, Ann, tulips

What I'm Working On - Improv style 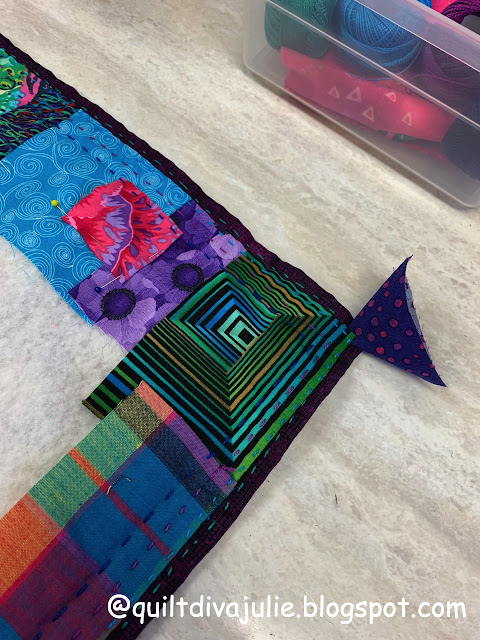 Last weekend I took an online Zoom class
with Sujata Shah of The Root Connection
to learn how to make a hand stitched Siddi quilt.
You can see my very first stitches in this photo
along with my first Fula, a flower embellishment
that is traditionally placed at each corner. 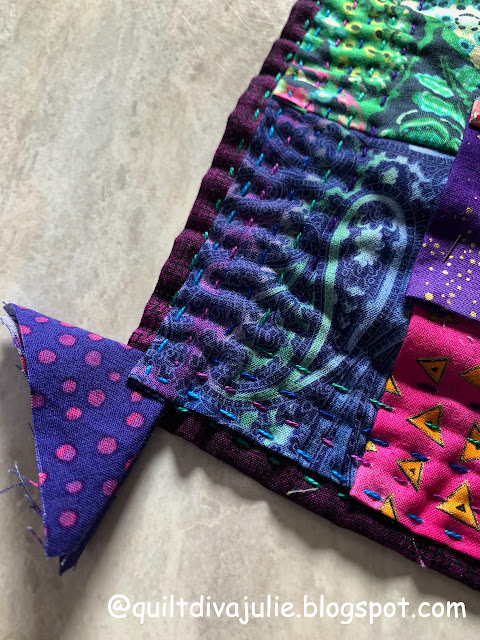 I can only hand stitch for short periods of time
so this is definitely a SLOW stitching project.
But it is so relaxing and engaging. 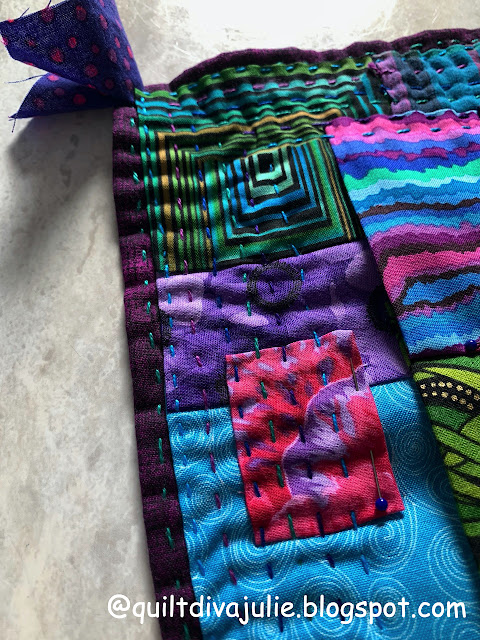 This is the same corner shown in the first photo
with the first Tikli (the pink patch)
nearly stitched in placed.
(Sujata told us that a Tikli is similar to
a sequin that is used for decoration) 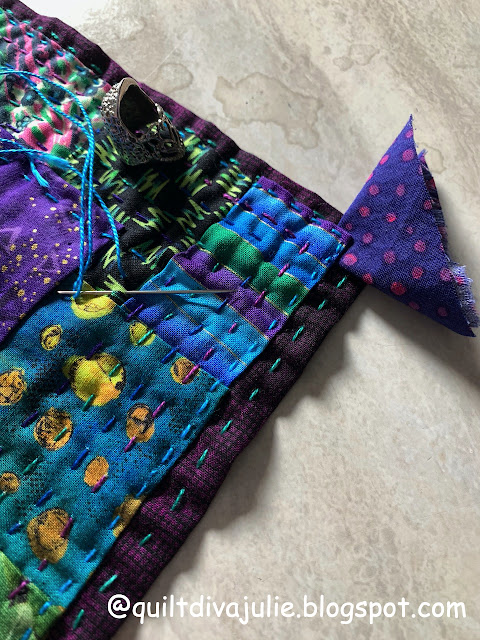 And this is where I stopped yesterday.
LOTS more stitching ahead on this small project.
* * *
There's plenty more going on in my studios...
you can read about all that on my blog
Me and My Quilts - Exploring the Possibilities.
And I do have my AHIQ Positive Thinking project
at quilt top stage - I last posted about it HERE.

[The bulk of this post first appeared on my blog on 25 August.]

Mary asked yesterday where we all are and what are we working on. My Mid-Century Modern Curves project has been on hold for several months; I've finished my blocks and have hit a wall with regard to final layout. I haven't stopped sewing, but my creativity seems to have dried up, along with my concentration.

In the meantime my daughter-in-law requested a shoulder bag for her daughter who loves putting things in bags! I had great plans and a pattern to make a sweet bag for a toddler. Then plans changed.

It started with the partial collapse of a wardrobe, followed by the removal of the contents into storage boxes and the transfer of a lot of old stuff to the recycling and the dump. Among the mixed handwork items on one of the shelves was a little piece of machine sewn crazy quilting that I had tried my hand at eight years ago, soon after I bought my new machine and was putting it through it's paces. I'd never taken a patchwork or quilting course at that stage, so didn't know the "rules": improv before I'd even heard of it!

It turned out to be just the right size for a bag for a little girl to put her hanky in! No pattern, no quilting cotton, but tweed, polyester, jersey fleece and even a piece of tea-towel; just improvising by trial and error: 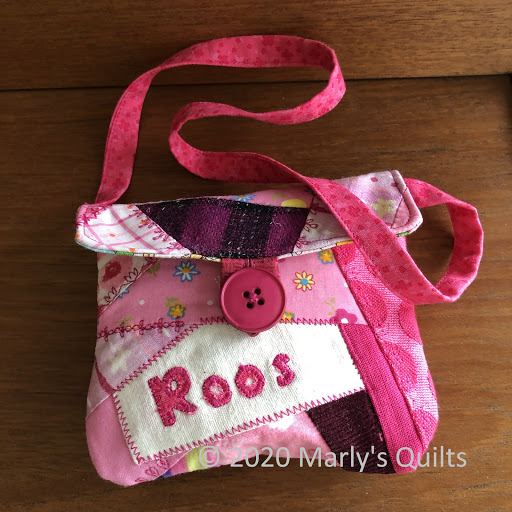 With a fun lining: 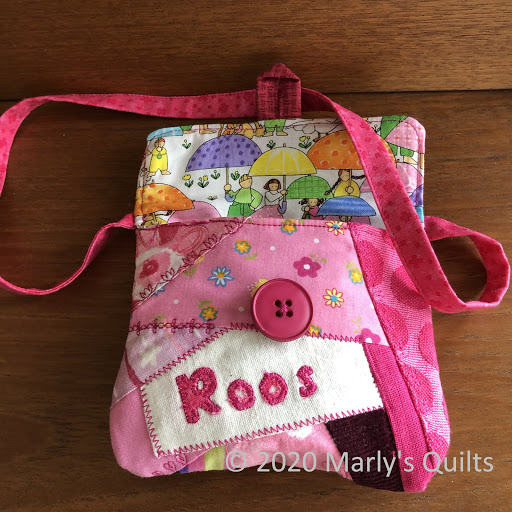 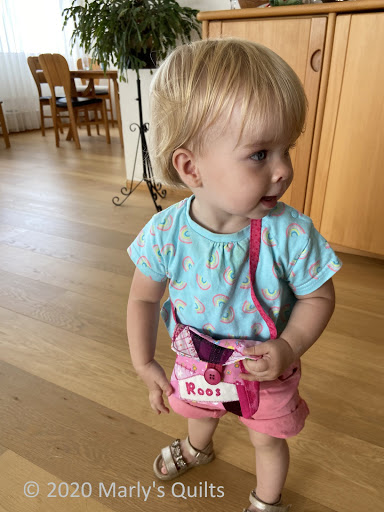 who wasn't sure about it at first ...
so her twin brother decided he'd like to try it 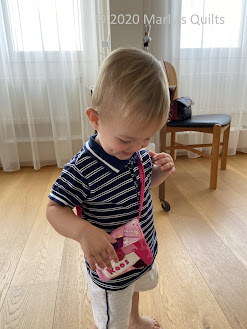 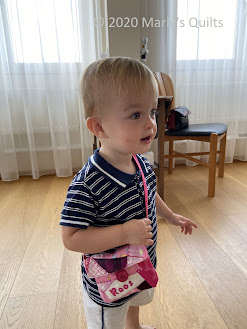 It looks like I'll have to make something for him too.

Other than Janie (thanks Janie!) we haven't been posting much. I suppose I could go searching for you individually, but I like efficiency.

So now back to everyone here, it's time for a roll call. All in one neat package, at the same time, in the same place. I'll make it easy and start:

Hi, I'm Mary. I fought CoVid and won. (Rather easily for a 60 year old.) We had a hurricane and more are coming but Louisianans are survivors. I have lots going on creatively but for that just go to my blog. I'll make it easy: https://www.fleurdelisquilts.blogspot.com.

How are you? What are you working on? How are you getting on with the insanity of 2020?

By Mary Marcotte at 9/14/2020 10:12:00 PM 2 comments:
Email ThisBlogThis!Share to TwitterShare to FacebookShare to Pinterest

My small quilt, Primary Plaids, was started as an AHIQ challenge, 'Thinking lovely thoughts'. The colors I used were the colors for August on my color calendar, Primary, which are the 'big three', red, yellow and blue.

Thinking 'lovely thoughts' and being away from my sewing machine I decided to make this quilt 'old school', just using scissors, hand piecing and quilting. Some of my favorite blog quilt friends and youtube quilt friends, hand piece and their work is amazing. So I gave it a try and really came to like the process of hand work.

Stop in to see Carin's handstitching work at Queeniepatch.blogspot.com, and Mieko of Mieko Happytime and her Youtube tutorials.

And visit my blog for more adventure.

Have a wonderful day!