Red is a Neutral - triangles and strips

For those who read my blog you will know the story, for those who don't
here is a brief summary and a look at the top 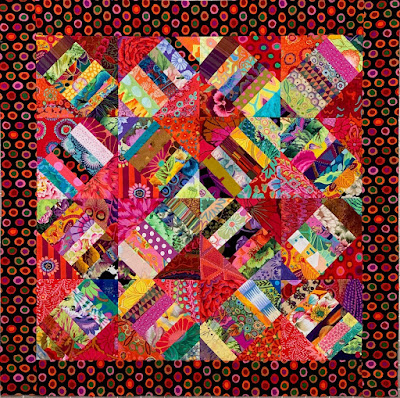 which is considerably smaller than I had intended, but I found working
with so much red a little overwhelming and my idea of a throw
size quilt was abandoned.
In fact at one point I considered abandoning the project totally!
Perseverance crept to the fore

Measuring 33" square it's fine for hanging on a wall.
I had quite a lot of reds left over from my Chinese Coin wall quilt
and good use was made of my scrap strings.

The border took a little time to hit on the one I really felt
tied the whole together - Rings in Black from
KF Collective fabrics.

Wonder what the next Challenge will bring!!
By Mystic Quilter at 5/29/2019 07:08:00 PM 5 comments:
Email ThisBlogThis!Share to TwitterShare to FacebookShare to Pinterest
Labels: Red is a Neutral

My Red is a Neutral quilt is finished! I've written all about it over at my blog. It's such a wordy post, I've almost bored with it myself. The post, not the quilt! I'll be having a hard time giving this quilt away though. It turned out so much better than I expected! Just wanted to pop in over here and give a shout out to Kaja and Ann. They always come up with the most interesting challenges!

By audrey at 5/17/2019 03:02:00 PM 4 comments:
Email ThisBlogThis!Share to TwitterShare to FacebookShare to Pinterest
Labels: #AHIQRed, Audrey, Modern Utility, Red is a Neutral, UandUQAL

Red is Neutral in Octagons with Y-seams

For the UandUQAL organised by Sujata Shah I am reproducing the Overlapping Octagons quilt from Roderick Kirakofe's book, "Unconventional and Unexpected". I haven't done much to it over the last few months; this is the present state of this lap quilt.

I have made octagons with red centres, corresponding to the AHIQ red is neutral challenge, and surrounded them by predominantly dark blue strings.  With this choice I aimed to use up most of my blue and red Civil War reproduction fabrics, and with the red I succeeded and have added more modern reds, but the blue were all so dark I soon started introducing flashes of other colours. 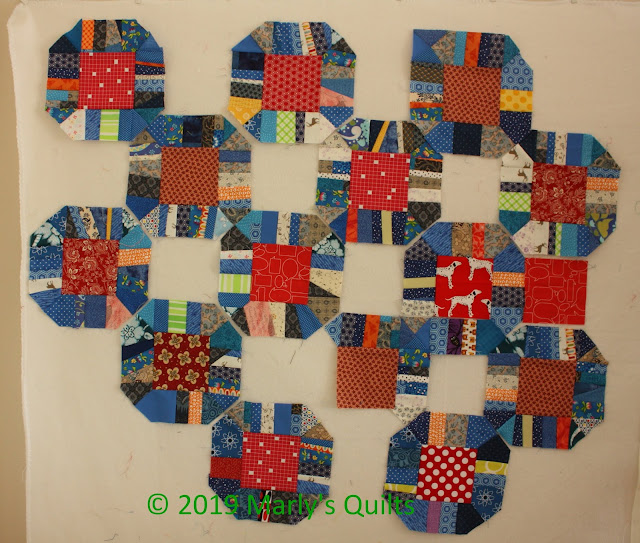 At present they're not overlapping, but I have more red squares cut, and here I've positioned them where red squares will go in the final design. 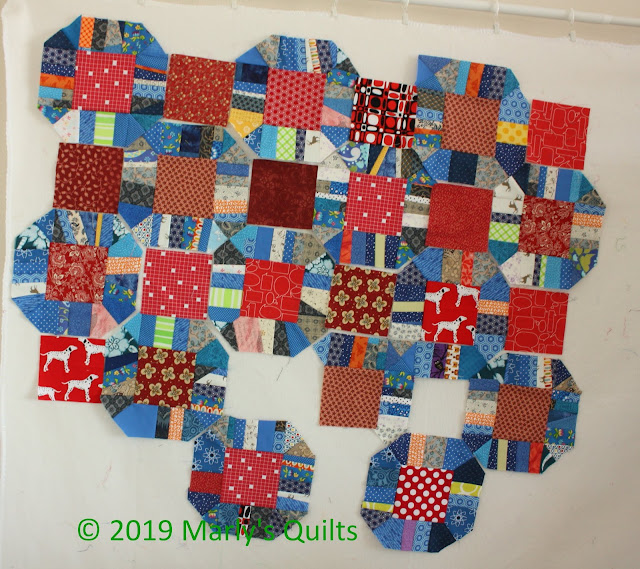 I am pleased that the overlapping octagons have now emerged.

The octagon blocks have Y-seams at each corner, and inserting the second set of red centre blocks will involve more Y-seams. I wasn't happy about this at the beginning, and so tried making hourglass blocks in the corners, as shown here: 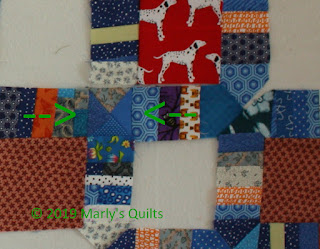 This is one of two hourglass blocks I retained, before I gave up on them. At each of  the corners of this hourglass block five fabrics come together making very bulky seams which I couldn't get to lie flat.

Doing Y-seams, however, means joining only three, which will lie much more easily, especially if the last string in the side panel continues into the corner triangle, as here below.

In this corner above, one of the four string sets ends in a separate triangle; this is one of the string sets I originally joined to an hourglass block. I rejected that method because of the lack of continuity between the string set and its triangular ending as well as the bulkiness of the join.

There was only one thing for it: Y-seams. I dreaded the thought! Now I'm becoming an expert! Practice makes perfect, they say, and I've had a lot of practice! The secret lies in:
The mistake I made when I first tried Y-seams was to start at the point where everything came together. It's very crowded there! Much easier to keep your distance from everyone else at the party. Approach slowly and stand still when you're close enough. After following a tutorial from Mary Huey on sewing tumbling blocks, it was plain sailing for me! Mary illustrates the process with lots of excellent, clear photos.

I'm not really sure any more if this really fits the challenge "improv", as I'm working from a photo of an early 20th Century quilt; not exactly a pattern, but an example. I am, however, working it out as I go along, which is a characteristic of improv.

If you think I shouldn't post this here, I apologise.

I am feeling a bit guilty about not posting in such a long while. Or reading in weeks. Or commenting on anything I have read. But I try to keep guilt at bay. Life is tough enough at times without adding to the difficulties. So the guilt is really not that bad. 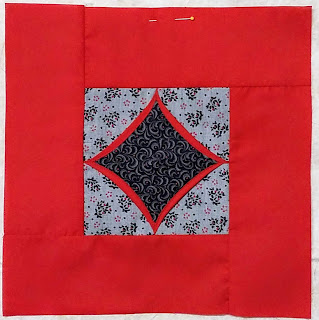 Anyway, I've finally put together some idea of what I could be doing with the Red Is a Neutral challenge. It's taken me a while to get here, but now that I'm on my way, I'm enjoying the challenge. My traditional quilt guild is working on a block of the month sampler quilt. I tried to go a couple of different ways with it: scrappy, then controlled scrappy. Nothing working. Then I ruined the couple of blocks I had made when I power-washed the studio. I figured it was a sign. 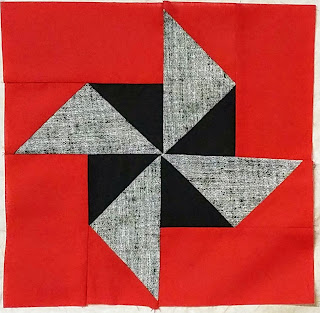 That's when it (finally!) occurred to me that I could combine the sampler and the challenge into one awesome project. These blocks are the first five of what I think will be 18. Each month two or three guild sisters present a block for the sampler quilt. We get to see a finished block, get show and tell instruction on how to make it, and get written instructions to take home. The following month we should return with, you guessed it, two or three completed blocks. We started in January. We should finish in July. The quilts are supposed to hang in our guild show in September. Everyone laughs when I say this out loud. Why? 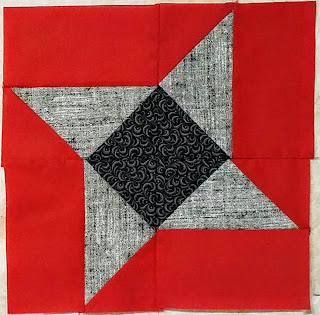 I think I have enough red for a complete quilt. I know there is not enough of this gray and black, but I plan to add more of those colors as needed. I also plan to wait before sewing the blocks together so that I can mix them up enough that the grays and blacks look like they all belong. 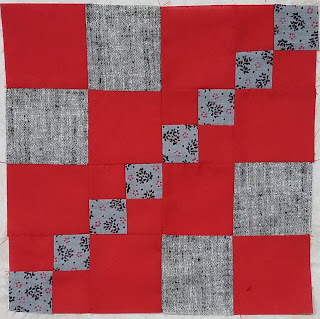 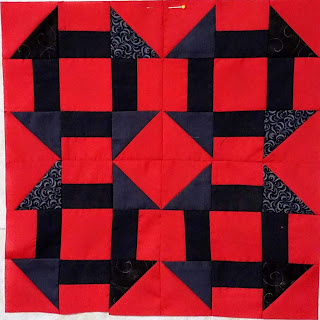 The blocks are 12" square except this last one. It's 15" because I messed with the instructions. Nonetheless, this block will be in the quilt. As my mom loved to say, "Somehow. Someway." I guess I'll just figure it out as I go along. Momma used to say that, too.

More about the beginning of this project on my blog, Fleur de Lis Quilts.