The Beginning of Something

This is the first part of my interpretation of a U&U quilt that caught my fancy. It's also my response to the 'flower' prompt given out earlier in the year. For some reason, this has been an especially difficult challenge to meet. After thinking about it for awhile, I've come to the conclusion that the reason for that is very simple. I make a lot of flower quilts and so thinking up new flower ideas is something that happens around here on a regular basis! In my head, a challenge should take me out on a limb somewhere uncomfortable and definitely somewhere outside of my normal comfort zone! Regardless, I have kept after it and finally came up with the idea to try an interpretation of a old scrappy 'make-do' sort of quilt and incorporate a 'difficult' flower element into the quilt.  The flower will be the Lemoyne start shape in the far right bottom corner of the quilt. It's a pattern that might be easy for you to piece, but has always caused me no end of troubles. Plus, this time I shall be trying to re-imagine it as a flower! lol

Yep, it's an idea that's been simmering for a couple months and not once have I soured on it. We shall see where it ends up, but for now, I'm very happy to have it started and now be fully 'committed' to moving on with the adventure. Points for starting out with a floral fabric. That has to count for something! You can read more about the making of this first section over at my blog if you'd like.

I have no idea

I have no idea where this is going. It was supposed to be a quick little quilt made with scraps just to give me something to do while I was between "real" projects. Sometimes I just can't get going. I resolve that problem with a new project. Every time. I resolve to work on finishing something. Anything. But the new project just happens. 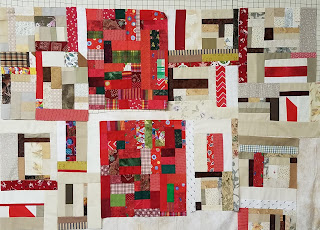 I guess the Red as a Neutral just isn't out of my system, because when I went to the scrap cupboard, they somehow followed me to the worktable. Anyway, there were some large chunks of scrap fabric in both bins, so win! I tried mixing it up a little and put some pieces on the design board. No, that was not working. 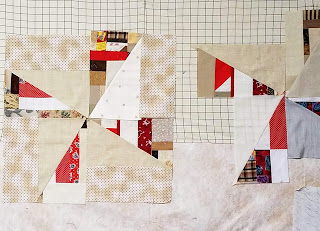 So I cut some pieces, trying to tone it down a little with larger pieces of neutral (left), making these rectangles cut on the diagonal and pieced together. No, not really working. I tried to make them into windmills (right). Still not a plan. But now I have a mission. I just don't know what that might be.
I'll keep you posted, both here and on my blog.

Do quilts talk to you like they do to me? 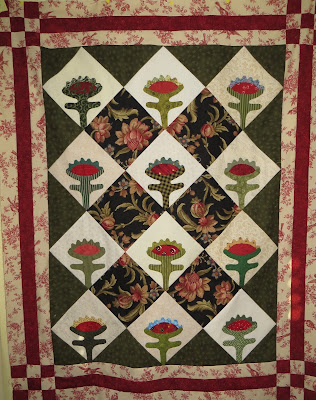 This is the way the floral challenge quilt looked the last time I posted. 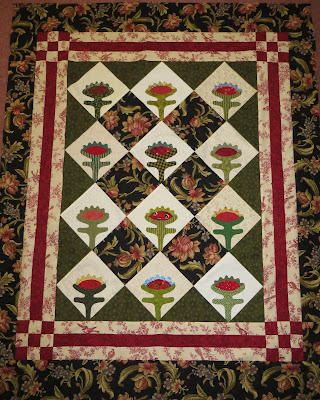 But, while I was doing that I first added a blue border (just on one side) using the fabric that is in the top right flower.  Boy, did that ever look wrong.

I decided the black fabric need to be repeated  but because I wanted it to be a certain size - that made the border wider than I planned (and it didn't help that I kept cutting it out the wrong width!)   I just kept unpicking and unpicking.

Now, with that border, the quilt is telling me that it's finished.   But I don't want to be done.

What a dilemma,
Robin
By Robin at 10/03/2019 03:08:00 PM 7 comments:
Email ThisBlogThis!Share to TwitterShare to FacebookShare to Pinterest
Newer Posts Older Posts Home
Subscribe to: Posts (Atom)