As I pieced today I was thinking about one or two aspects of quilting with shirts that give me pleasure, but that can also  be quite handy, so I thought I'd do a quick post and share them.
First of all, if I am using a fabric that I was sure would work but it just seems a bit...well, a bit too much (and actually works for yardage as well),  I have been known just turn it over and use the back.  Sometimes, like with this lovely blue, I think you'd be hard put to tell which side was meant to be the front (it's the all blue version). 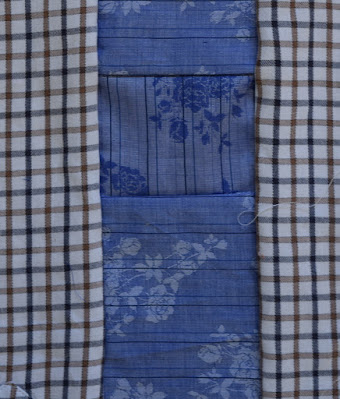 I know there are one or two prints that I have used in several quilts but always wrong side up,turning them from slightly garish to tastefully understated, or at least to less garish.
The second is that many shirts, even quite cheap ones, come with a lined yoke.  Occasionally this is just the same as the rest of the garment but often they are carefully co-ordinated.   The two fabrics in this centre strip came from the same shirt

as did the two on the right hand piece here 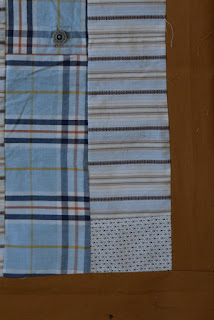 Someone else has matched the colours and thought about how the two designs complement each other; all I have to do is cut them apart and sew them together again.
By Kaja at 6/15/2021 09:11:00 AM
Email ThisBlogThis!Share to TwitterShare to FacebookShare to Pinterest
Labels: Modern Utility, shirts

Thanks for sharing your piecing thoughts.
A lot of unplanned surprises can come with piecing plaids.

I love using the underside of fabric occasionally. It sometimes is just the perfect color!

Using the reverse side of the fabric is something I've done many times and I do think it can work very well.

I had a shirt with bright pink facing inside the yoke, cuffs, and front tab. Isn’t it fun to get these extra fabrics. Looking a the section I’m working on I see one of th pieces is sewn backwards. Time to get the seam ripper out.

Sometimes, when I need a bigger variety of a color than I have, I look at the wrong sides. More often than not, I'll find a piece or two. It's a pleasure, especially since it means shopping my stash and saving money.